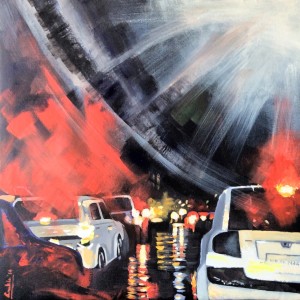 Often an idea for painting germinates from the seemingly ordinary. Infact, to liven up the mundane trough art is an exciting process and one that fascinates me. Just an everyday cup of tea when captured on paper through water colours or acrylic or even a mere pencil or  pen can create a work of interest. But more on everyday objects in another blog..

Today I wish to speak of how ideas can suddenly spring from nowhere. I was driving back home one evening when suddenly there came a very heavy downpour. On a normal day it would have been a half-an-hour drive, but soon it became evident to me that it would take much longer. Within no time,  the normally busy city roads, became crammed with vehicles as traffic slowed to a snail’s pace  as is usual during shower spells. The initial euphoria of the rain soon gave way to irritation as the serpentine traffic would hardly move.  Add to that , the FM radio was blaring ads non-stop instead of some romantic monsoon music!
As I got ready to put myself through a test of patience, staring ahead at the traffic snarl in front of me, I began to see a riot of vivid red, black and white..and the colours began to fascinate me. On a whim I clicked a picture of what I saw, from  my mobile phone, seated behind the wheel of my car.

To others this could be a usual rainy evening, but to me was born an idea. I was excited by the reflections of the car headlights, and add to that the glare of the flash from my phone created another aspect to the image.
Back home, as the germ of an idea started taking shape in my mind, I took out a spare canvas and splashed the colours  the image had captured..midnight blue,  fiery red, a hint of green and the white of the glare.

For a few days I left the canvas this way, enjoying the image the brush strokes had created. To be honest, I was quite content to keep it this way. But the process of creation is an organic one. Soon I felt that I ought to do further justice by creating the shapes and forms of city life as I saw that evening.

I wanted to keep the rawness of the image intact. When I felt I was done, I signed it. I didn’t realize then that I would change it further!

Everytime I looked at the painting I felt that it was very generic – not typical to Kolkata. Even though it was taken while I was driving through Kolkata streets, nothing in the painting suggested the character of the city. And I somehow wanted people to recognize the city through the painting. I incorporated a small change.

In no other city does one find these black and yellow taxis. And soon they will be gone from Kolkata too, for better or for worse, who can say?